Sometimes, things come as it comes, giving you surprises all across the way. Blogging has just been that way for me. I started it at a whim on things, but believe me, now I am enjoying each and every bit of the cooking, clicking, typing and random rambling!!! Not to mention, all of you out there who have been extra supportive... :)

You may have noticed that from the beginning of the year, we have had two cook-along for the Kerala Kitchen - the first one being the Kappa Masala and the second being the Chammanthi Podi, both which were hosted by Nagalakshmi from Edible Garden, who I don't think needs any introduction - she is such a seasoned blogger! The whole purpose of Kerala Kitchen blog was to introduce to all the beauty of Kerala cooking - how much it varies from north to south!!!

This month, when things were silent, I casually popped up the question if I could host this month's cook along and quickly came the response in the form of a big YES. What I had in mind was a very traditional Malabar spicy delicacy, which people think is intimidating, when actually it is not. I was also among the first category of people who did not want to make this at all, considering the time that goes into preparing it and the so-called complicated look of the dish. Yes it does take some of your time, but for the effort, it is really worth. Actually, it is a couple of simple dishes plugged into two that gives you such a lavish yummy tea time snack.

Yes, I am talking about the Athishayapathiri. I found some reference online which calls it the Malabar Lasanga, which sounds so true!!! It is basically pancakes, layered with chicken filling and baked till it gets binded by the egg poured onto it. Slightly time consuming, but it is quite easy to make. My umma learned it from one of her friends and every now and then, when she is in an elaborate mood, she goes on to make it. So you can say, I learned it from her. 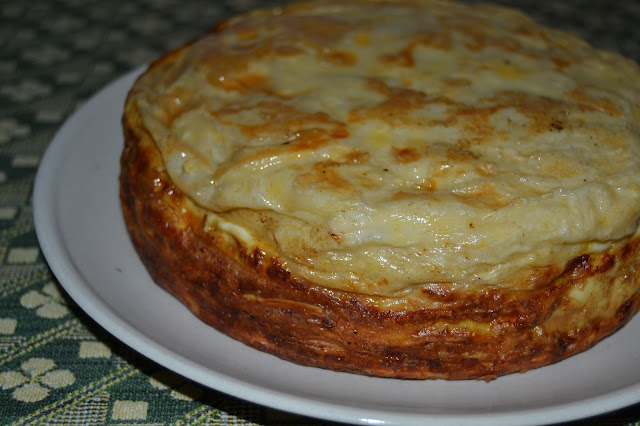 Wash and cut the boneless chicken. Cook in the pressure cooker along with the ingredients from turmeric powder to salt for one whistle. Once the pressure goes on its own, keep the chicken on high flame till the stocks dry up and coat on the chicken. Meanwhile, heat the coconut oil and saute the onions and green chilies with a pinch of salt till well cooked. Pulse the cooked chicken in a grinder. Add the chicken to the onion and mix well. The masala is ready.

Now let's make the pancakes. Add all the ingredients and sufficient water (a cup should be fine) and blend well to form a thin batter. Heat a small frying pan and make the crepes without using any oil. Only cook one side, you do not need to flip over. The quantity mentioned gives around 10 pancakes. Keep aside.

In a small saucepan, heat the ghee. Fry the cashews till brown and set aside. Then fry the raisins till puffed up and keep along with the cashews. Heat up a saucepan (the one that you use for making your curries!) till dry. Pour this ghee in the saucepan and nicely brush all over the pan. Use more if required. We will use this pan for the layering.

Beat the eggs along with the salt and pepper well with a spoon. Now dip one pancake both the sides and place it in the saucepan. Sprinkle some chicken masala and the cashew/raisin on the top of the pancake. Dip the next pancake into the egg and lay on the top, again sprinkle the chicken masala and cashew/raisin on top. Keep repeating the process till the last pancake is layered on the top.

Now slowly flip the pathiri onto a flat plate, and then flip it again on another plate and back into the saucepan for cooking the top portion properly (I hope you got what I meant!!!). Keep for another 15 minutes. Ensure the flame is low so that the outers don't get burned.

For serving, flip it onto a flat plate and cut it just like a cake. Serve warm with a hot cup of chai or coffee!!!

1. Ensure that the pancakes are really thin. Thicker pancakes would destroy the taste of the whole pathiri!

2. Do not stuff chicken too much, sprinkle sparingly. The best thing to do is divide the chicken mixture based on the number of pancakes available less one, and sprinkle each portion wise.

3. You can add some coriander leaves for the sprinkling if you love the flavor. I have avoided it here.

4. You can bake it in your convection oven as well. Just keep at medium temperature (around 170 degrees) for 15-20 minutes, or till the top gets baked well.


On an ending note, if you want more descriptions to this, then you can refer to what Shab of Shab's Cuisine - who I love to call the Cooking Queen of Malabar: refer to her list of recipes to beleive me!!! - had posted at the beginning of the year... Here is the link to it...

Now do you want to be a part of the cook-along? Just be a part of the Kerala Kitchen Facebook page and get cooking!!! This cook along will be for a period of one month starting from today till June 6 and anybody of you who tries it out, can link it to this page...